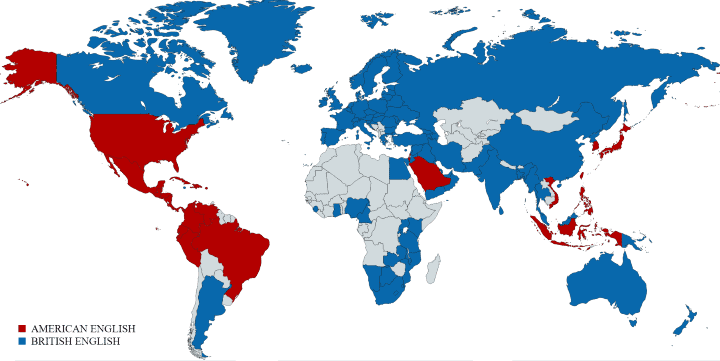 The map above shows which version of English is most commonly taught in schools – British or American. Of course this does not mean that people actually speak the version they learn in school, it’s just what they are taught.

However, Canadian pronunciation and vocabulary is much closer to American than it is British. Moreover, Canadian English also has a vocabulary all its own with words like: Tuque, Two-four, Pencil crayon, loonie/toonie, etc.

Explaining his map in greater detail Speech500 says that:

I based this map on a variety of sources from across the web, many of which I have listed below. The country is coloured based on the variation of English which is taught as standard in that country. Certain countries may have more people who speak British English, for example, but if American English is taught in schools, then that country would be red, and vice versa.

It is therefore worth noting that just because a country is coloured a certain way, it does not at all mean that every English speaker in that country speaks the corresponding variation of English. There were awkward countries which had seemingly no preference, such as China and Brazil, so I went with the variation which I saw mentioned most by people in those countries.

There are countries such as Canada, Australia, New Zealand, and Ireland, which teach English natively and therefore have their own variation, but the type taught in schools is based on British English in all of those countries.

And in case you’re curious here are just some of the varieties of English that are spoken around the world:

And the list above does not even mention regional dialects found in many countries (e.g. Scouse, Cockney, Southern, etc.)

English has also been the inspiration for some constructed languages such as:

Find this map interesting? Please help us by sharing it.