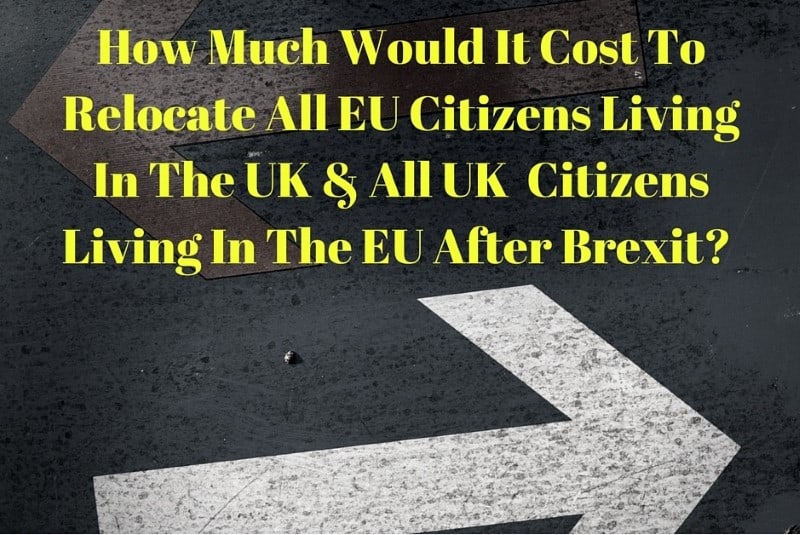 After doing some number crunching, we’ve found that the absolute minimum removals costs for relocating all people would be:

And, just to be clear, this is just the cost of moving people’s stuff to and from the UK. It does not include transportation costs for people flying/driving home.

If all 4.3 million people affected managed to find cheap flights, for an average price of £49 (one-way), it would add an additional £211 million to the costs above.

We’ll go through in detail how we arrived at these numbers below, but several caveats should be addressed first.

Nevertheless, it will be nowhere near a complete population swap. It’s a hypothetical what-if scenario, rather than any attempt at a prediction.

That said, the costs outlined below are also extremely conservative. They reflect our own international shipping cost data, along with data from World Freight Rates (WFR).

We took the lowest estimate given by WFR for a full 40ft truckload of household goods with residential pickup & delivery and multiplied that by the estimated number of moves between countries to arrive at the numbers above.

However, if everyone had to relocate at once or within a relatively shot period of time (say within on year) costs would skyrocket. The simple reason is that there wouldn’t be enough movers and removals companies, available to handle the sudden increase in demand.

If all the moving companies that performed these moves only focused on relocations related to Brexit, there would still be a massive gap between supply and demand.

It should also be noted, that the costs presented above do not take into account the wage and labour impact the removals industry would face after losing a large section of its workforce. With fewer people available to actually do the moves, costs would increase even further.

Finally, if you’re thinking this would not affect you. Just keep this stat in your head. Each year 7 million UK residents move home, many of them requiring a removal company.

With prices going through the roof, on expensive international moves, and fewer movers available to do them, let alone cheaper domestic moves, your cheap man & van is going to suddenly look a bit dearer.

Below we go into more detail about how we arrived at the two numbers above that make up our £1.1 billion total.

Cost of Moving All UK Citizens Back From The EU

As mentioned above there are roughly 1.26 million UK citizens currently living in the EU according to the UN.

Now obviously, many if not most people move as a family, rather than individuals. So to estimate the number of moves from each country, we simply divided the resident population by 2.3 people, which is the current average household size in the UK.

This gives us the total number of moves from which we can start figuring out costs.

The costs as mentioned above are based on a 40ft full truckload move with both residential pick-up and drop-off. To keep things simple we simply selected the rate from the capital city of each country to London. Obviously moves between more remote destinations would cost more.

Moreover, it does not include other common moving costs such as insurance, packing, taxes, etc. These costs would further add significantly to the overall price paid per move. Therefore, the numbers given below are the absolute lowest that could be paid, not a realtisic estimate of what prices would actually be like post-Brexit.

Number of moves by country:

Cost of moves by country:

Cost of Moving All EU Citizens Back To Their Home Countries

The same basic assumptions have been used in the following calculations as those above. The only thing to note is that price estimates were from London to each country’s capital city.

Number of moves by country:

Cost of moves by country:

First, don’t panic! Even if the UK does vote for Brexit, it won’t suddenly leave the EU. There will be a long negotiation process that would take up to 2 years. And even then, the free movement of people may remain as a condition of the UK maintaining access to the common market.

Second, if you’re eligible to vote, make sure you do so on June 23rd, 2016. And remember if voting by post, your ballot is due by 10pm on election day.

Finally, if you really want to be prepared, you can start researching international removals, moving, and shipping companies. Moreover, you may also want read more about international shipping costs and questions to ask your mover when getting moving quotes.

Please leave your thought about this research below. And if you found it interesting please share it with a friend.

Using this research: Any media outlet / website is free to republish our main findings, so long as they give linked attribution back to this page and/or MoverDB.com.