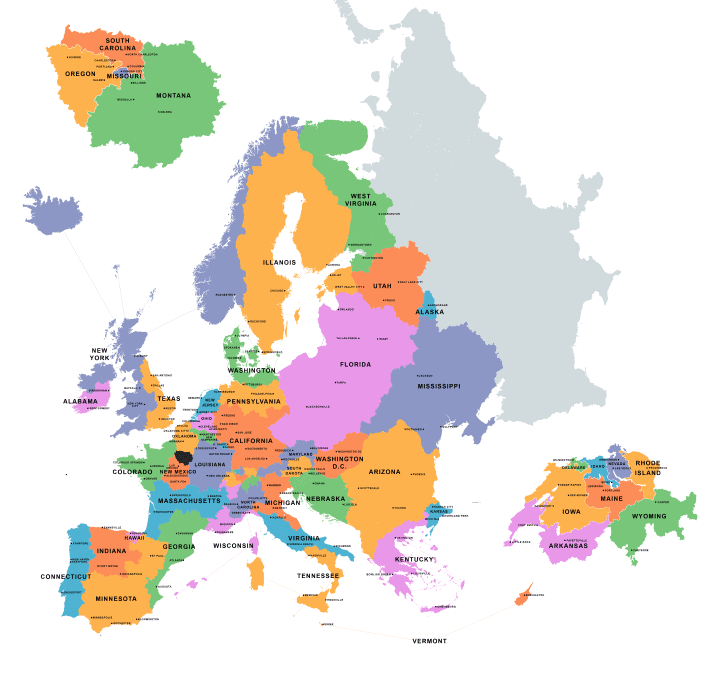 The map above shows different areas of Europe that are equal in terms of GDP to a given American state, along with cities that also correspond in terms of importance (based on population).

Speech500 explains how he made the map:

To make this map, I calculated the GDP (nominal) of every subdivision of every European country, based on the most recent data. I then grouped these subdivisions together into areas with a GDP equal to a US state. Then, more for fun than anything else, I found the most populous/important few cities in each European area and replaced them with the names of large/important cities from the corresponding state. It took quite a while.

Overall, the economy of the EU and the United States are roughly equal at between $16-18 Trillion USD each depending on the source used. However, the distribution around Europe can lead to some interesting results.

Similarly, Switzerland (shown off to the right on the map) has a GDP equal to Arkansas, Delaware, Idaho, Iowa, Maine, Nevada, Rhode Island and Wyoming combined. However, Switzerland has a population of just 8 million people whereas the 8 US states combined contain around 14.5 million people.

These exceptions aside, income per capita is significantly higher in the United States than Europe, with the US average around $56,000 per person compared to Europe’s $35,000 per person.

Find this map interesting? Please help us by sharing it: